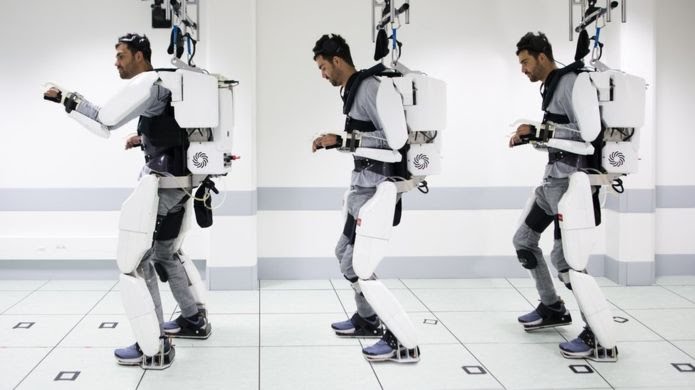 The Implant, The Algorithm and The Exoskeleton

Recently, the BBC [1] made a great article showing Thibault, 28 year old, who didn’t walk for four years, doing his first steps in the EMY exoskeleton [2]. His body was moving with the assistance of robotics arms and legs controlled by the decoding of his motor cortex activity in real-time. The brain signals are recorded with two 64-electrodes electrocorticographic implants WIMAGINE(c) [3].

This demonstration was followed by a Press Conference (in French) with the team and the impression of Thibault. I think it is great that Clinatec decided to include the user in the loop so we can get a direct feedback and his view of the technology. Earlier this week, the related paper was published in the Lancet [4].

This achievement was able due to several pieces of state-of-the-art engineering developed inside Clinatec and at CEA: the acquisition system (the wireless and biocompatible WIMAGINE implant [3]), the decoding algorithm (tensor decomposition-based regression [5]) and last but not least the EMY Exosketon [2].

Where is the Machine-Learning?

Often the algorithm component has less public discussion, however it is maybe the greatest assets of the BCI systems. Indeed, decoding the right brain activity, even with the quality signals of electrocorticography, is a complicated task with disastrous results if not done right (i.e. pushing yourself in the face or simply not doing anything while the user desperately want to move). At Clinatec, they used Machine Learning and specifically a tensor decomposition-based regression [5]. For my master thesis, I contributed to this algorithm for robustness and designed a safe-guard to prevent wrong movement [6]. If you want to read more about the Machine Learning component, I advice the 2017 thesis of Marie-Caroline Schaeffer (at Clinatec) [7].

Are we already in the future?

Of course the project still have a long way to go if it want to help tetraplegic users get more autonomy. Thibault can’t bring EMY home yet nor walk freely on the street. However, I believe in a not so distance future, BCI/BMI might help regain the society in many different fields. Still a lot of investment and effort are required. Concerning Clinatec, you can help by donating to the foundation.

I’m really happy to see that the project reached this milestone and very proud to have contributed to the ECoG regression algorithms back in 2013 for my master thesis. Congratulation to the BCI team at Clinatec! It feels good to see Thibault’s smile 🙂