Last week in Toulouse (France), the French Brain-Computer Interface (BCI) community was united for a great national conference: The CORTICO Days 2018. In fact, the conference is born with the fusion of two great events “Young BCI researchers day” and the “CORTICO day”, organized by the scientific association of the same name. With the growing international BCI community and with the creation of the BCI Society, this event feeds the increasing need for global and local scientific cooperation in the field. The conference was dense, fruitful and a great success.

The first day April 18, 2018, was dedicated to the young researchers. We had the opportunity to present our work (oral or poster) and, most importantly, to meet during the coffee breaks. There were also great keynotes such as “The influence of non-invasive brain stimulation on the human motor and cognitive performances” by Pr. Stéphane Perrey, “Introduction to Signal Processing for Brain-Computer Interface” by my thesis director Pr. Marco Congedo, “Contribution of BCI to Human–computer interaction applied in handicaps” by Pr. Nadine Vigouroux and a great discussion on bad research practices by Pr. Catherine Tessier. If you want to know more about the program, just take a look to the official page.

I presented a application of our work in blind source separation for BCI, the presentation is available for download: Extracting EEG sources of ERP based BCI by Composite Approximate Joint Diagonalization

Of course, we had also a great time in Toulouse. The gala was taking place a nice restaurant within the walls of the old city. The restaurant was nested in a vaulted cellar, surrounded by a neo-baroque atmosphere ; exactly what you are expecting from a traditional french restaurant. It was my first time in Toulouse and loved the architecture. The city won the pseudonym “Pink City” because of the construction materials (mainly terracotta) but I have to say that “Orange” would be also appropriate. 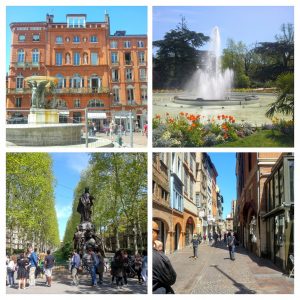 CORTICO 2018 was a success. I met several researchers, mostly my fellow PhD candidates. We started a discussion on the good practices for EEG based BCI system and I hope that it will talk more about this on this blog soon.